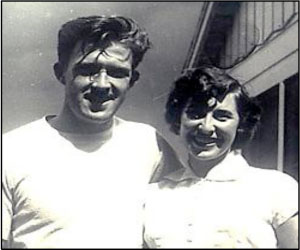 In 1946 Ben McWhorter, a lifelong resident of Humboldt County, went to work for Youngreen Propane Gas Service, established in 1941 in Fortuna, after serving in the Army Air Corps as a Flight Engineer and gunner on a B-24 Liberator during World War II. He bought the company with Gene Youngreen in 1950; that same year he married the company’s book keeper Billie Lawrence, and soon after they started a family. The family would eventually be composed of four boys and four girls. The company’s name was changed to Sequoia Gas Company in 1951. In 1954 Ben and Gene agreed to part ways and Ben and Billie became the sole owners of the company.

With hard work and determination the company grew and expanded. The floods of 1954 and 1964 were major setbacks for the area and the company. Working day and night the company’s employees returned propane services to their customers. The 1970’s brought the Oil Embargo, price controls and a tough business environment. In February of 1976 Ben was killed in a tragic auto accident and Billie was left with a propane company in not the best of shape and seven children at home.

With a lot of experience raising children and not much in running a propane company, Billie had a tough decision to make. Should she sell or make a go of it. If any of you knew Billie, the answer was easy. Keep Sequoia Gas. With the help of her family, trusted industry leaders and Gene Lucas she excelled in the propane business and took it to another level.

In 1984, Sequoia Gas opened a new office in Arcata. Shane moved up to the area and starting with nothing, built a great branch office and plant that expanded Sequoia Gas’s customer base.

1989 saw the North Coast hit by a major earthquake and it caused wide spread damage among our customer base. Our employees rallied and with outside help from our friends in the propane industry, we restored service to our customers in a very short time under challenging conditions.

In 1991, Sequoia Gas hit a milestone; 50 years of being in business. After running Sequoia Gas for 23 years, Billie lost her battle with cancer in December of 1999. At that point, Shane and Shannon had been actively managing the day to day business for some time. At one time or another, all eight children of Ben and Billie’s have worked at Sequoia Gas Company, and all had a hand in its success.

In 2000, Britni McWhorter, joined the company and in 2009 Ben McWhorter joined.

In 2016, Sequoia Gas hit another big milestone; 75 years in business. Today the company is owned by Shane, Shannon and their children Britni and Ben who represent the third generation of McWhorter’s to be a part of the family business. Shane and daughter Britni operate the Arcata Branch along with Britni’s husband & Service Manager, Casey Mitchell. Shannon and son Ben operate the Fortuna Branch.

In the Fall of 2022, Sequoia Gas joined the Blue Star Gas family. Blue Star Gas started in 1938 in Garberville, California by the Stewart family, longtime friends of the McWhorters, and now serves 17 unique markets throughout California, Oregon, Washington, Arizona, and Utah.

Throughout the years Sequoia Gas Company has been blessed with some exceptional employees. Without their dedication to the company and our customers, Sequoia Gas Company would not be here today, and now as part of the Blue Star Family, the best is yet to come.

As of 10/1/2022, Sequoia Gas has merged with Blue Star Gas and we are pleased to welcome Sequoia gas customers to the Blue Star Gas family of companies. Please see our announcement to learn more about this exciting next step in supporting our local communities.